One way for early interventionists to measure progress toward proficiency in early movement in infants and toddlers is the Early Movement Indicator (EMI). The EMI is a play-based observational measure of a child’s movement during a 6-minute play period with specific EMI toys and a familiar adult. 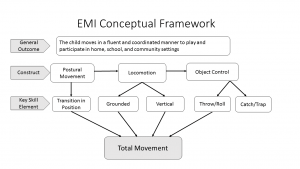 The five movement skills that make up the EMI are based on a conceptual
review of the literature followed by validation with other criterion measures of movement and motor ability for children this age (see Technical Soundness). The five key skill elements are: Transition in Position, Grounded Locomotion, Vertical Locomotion, Throw/Roll, and Catch/Trap. These skills were selected to represent the postural movement domain (Transition in Position), the locomotion domain (Grounded and Vertical), and the object control domain (Throw/Roll, Catch/Trap); three skill classes that are important for children who are just acquiring movement skills. The rates of occurrence of these key skills form a single indicator of Total Movement.