Proficiency in problem solving is an important outcome in early childhood related to cognitive, communication, and social/emotional development. Children’s early skills solving problems and achieving goals set the stage for their later intellectual and social competence. Moreover, children’s early problem solving skills affects the way they navigate and explore their environment, their mastery of skill development, their reasoning ability, and helps them adapt to challenging circumstances. Consequently, a major focus of early education and early care is young children’s cognitive development including problem solving (National Research Council, 2001). Problem solving skills are also a desired general outcome of early intervention that parents and professionals identify as important for young children. Proficiency in solving problems was one of 15 general child outcome statements investigated by a national sample of parents (n=351) and professionals (n=672) (Priest et al., 2001). Of the 15 general outcomes examined in the study, problem solving was among the most highly rated. Other highly valued general outcomes included expressive communication, movement, and social skills, among others (Priest et al., 2001).

One of the most important missions of early intervention is to help children learn to explore their environment so that they have new and varied experiences. Whether the intervention is home-based or center-based, a critical outcome for our youngest children is to learn how to experience the world through exploration of objects, concepts, situations, and people.

Programs for very young children need to know when children are making progress in becoming proficient problem solvers. Programs need to know when to take some action in the form of different intervention procedures. Programs also need to decide critical issues such as  the kinds of support children will have to help them become better skilled at solving problems or when to supply in-depth assessment and referral for children not making acceptable progress. The Early Problem Solving Indicator (EPSI) is one means of checking children’s growth toward the important general outcome of solving problems that requires reasoning, concepts, adapting to challenging situations, and interactions with people. Because children’s rate of growth in problem solving is so critical, the rate of growth on the EPSI for each child and for all the children in a program becomes an important indicator of how well a program is supporting children’s problem solving proficiency. As such, the EPSI can be a powerful tool for monitoring individual children’s growth and making intervention decisions. It can also provide helpful information on program progress and inform programmatic decisions regarding this essential outcome.

One way for early interventionists to measure progress toward proficiency in cognitive problem solving in infants and toddlers is the Early Problem Solving Indicator (EPSI). 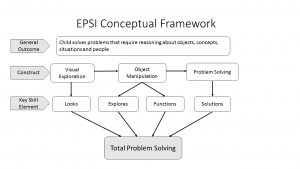 The EPSI is a play-based observational measure of a child’s growth in problem solving with toys occurring during a 6-minute play period with a familiar adult.

Four of 5 problem solving skills were selected to comprise the EPSI based on a conceptual review of the literature and statistical validation with other measures of cognitive reasoning and problem solving. The fifth skill, Engagement, was not selected for further development because across children it tended to have a ceiling effect and restricted variation. It was not particularly sensitive to individual differences among children in the sample and growth over time.

The key skill elements with specific problem-solving properties were: Looking, Exploring, Functions, and Solutions. These skills were selected to represent the visual exploration domain (Looks), the object exploration domain (Explores and Functions), and the problem solving domain (Solutions), three skill classes of importance to children who are just acquiring problem solving skills. These key skills form a single indicator of Total Problem Solving.